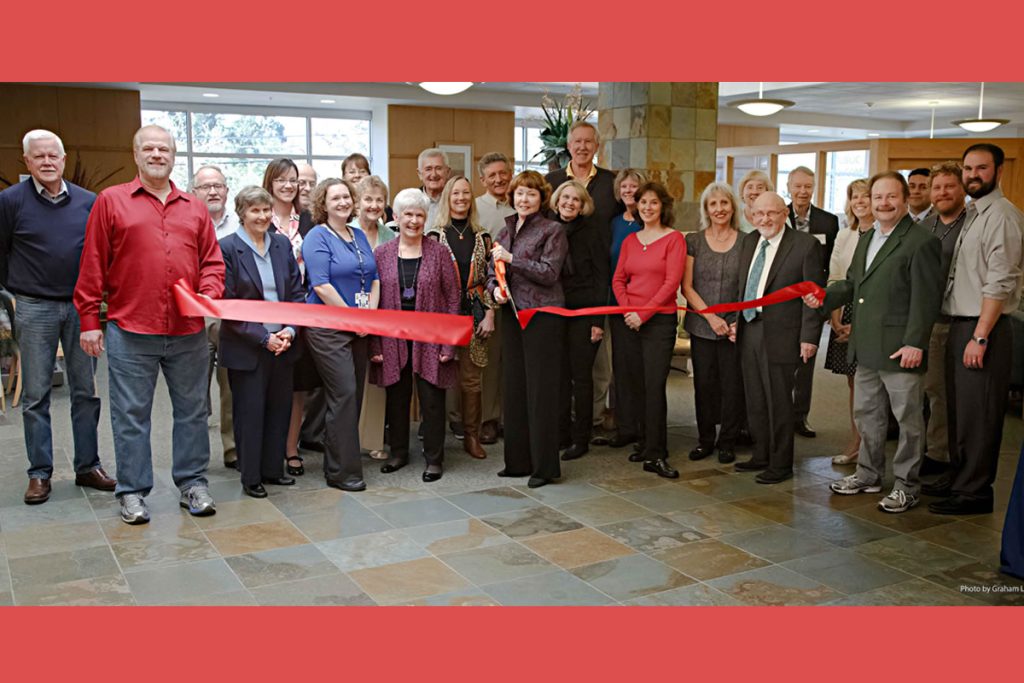 To commemorate the special occasion we held a ribbon cutting ceremony with the Ashland Chamber of Commerce surrounded by members of the board of directors of the foundation, employees, and long time donors to the hospital.

You can learn more about our milestones and accomplishments over the past forty years, and watch a special video below we created to celebrate our history.

Furthermore, in the spring edition of our Inspirations newsletter we look at our first twenty years, as told by those who served during that critical time in hour history. We will touch on the last two decades in our next edition coming in the fall.

(Joy Dobson Way, President) I am honored to serve as president of the board during our very special 40th anniversary celebration. Since our founding in 1977, the success of the hospital has been core to our mission and vision. I truly believe our hospital is one of those rare community assets which may have an opportunity to touch every one of us at some time in our lives. These are the beliefs that motivate every member of our board of directors to contribute our time, our talent, and our treasure to support the work of the foundation. On behalf of the board and the staff I would like to sincerely thank you for your support over the past 40 years. We look forward to many more years of service to our hospital and the community. I hope you enjoyed this short video highlighting the unique history of the foundation and its milestones.

(Janet Troy, Executive Director) As we celebrate Ashland Community Hospital’s 40th anniversary this year I’ve had the opportunity to reflect on all of the accomplishments and successes over the past four decades and I’m filled with gratitude for the many people who have been a part of our success. The foundation is about people, people from all walks of life who share one common goal and that is to have a thriving vibrant Hospital.

(Brian Almquist, Former Ashland City Administrator) My name is Brian Almquist and I served as Ashland city administrator from 1970 until 1998, so about 28 years, and I was a member of the Foundation Board for 12 of those years. The history of our hospital goes back 11 decades; it’s been in five locations and five different ownership forms. In June of 1976, at the urging of the hospital administrator Bob Strowbridge and the hospital board members the City Council by ordinance established an endowment committee which was the forerunner of the foundation itself and then 10 months later in April of 1977 the City Council approved the formation of the foundation.

(Chuck Butler-Past President) My name is Chuck Butler I’m the owner of Butler Ford and several car dealerships in Ashland and Medford. I’ve been on the Foundation Board starting in 1988 for about ten to twelve years. In the 70’s it started with the city of saying we were going to take money from you, $40,000, to balance their budget so the handwriting was on the wall that the hospital was on its own and I think with all publicity that was going on around the city it really developed a groundswell of support for the hospital that we’re not going to let this hospital get away. In 1990, Pat Flannery came on us our Director of Development, the Foundation Gala was put together that was an annual dinner dance that was well received by the community. We came out in 1991 with a Distinguished Service Award and 1993 we established a golf tournament, and it goes on and on that’s every year we had something new.

(Linda Jackson, Past President) I got started the foundation years ago I was invited to become a member and I decided it was something I’d like to do because we were living in Ashland at the time and just getting to know the area.

(Sandra Slattery, Past President) Well, I was asked to serve, and I served six years on the foundation and two years in 2013 and 14 as president. I served on a negotiating team with the representatives from Ashland and representatives from Asante and we entered in a merger. Fortunately, we were able to keep our Ashland Community Hospital Foundation as an independent organization. Over the years the foundation has supported adding digital mammography, we had a complete overhaul for the emergency department, and we also had the Family Birth Center redone.

(Brian Almquist) They were able to do a complete renovation of the number of the patient rooms, established its first chapel, and equally important established the first nursing scholarship.

(Linda Jackson) The Evans scholarship started with $100,000 in 2001 and in 2002 we gave $500 scholarships to three different students that we had chosen. The Cora Nixon Endowment was created in 2003 through the interest from a gift of $297,000 from her estate and it supports the Lights for Life project that we do each year.

(Chuck Butler) In 1988 Bill and Florence Schneider moved to Ashland and he approached the foundation about the possibility of a donation of land at they owned so they approached me with a proposal that they wanted to develop a senior resident center in Ashland.

(Sandra Slattery) The first employee campaign where the hospital foundation was launched in 2011 and it’s been a great resource for the foundation because of the philanthropy of the really generous people who work for the hospital.

(Sheila Clough-CEO) I often say philanthropy is the essence of excellence and what I mean by that is that hospitals, universities, and other organizations who can tap into the power of philanthropy can move their organizations from great organizations to excellent organizations. And over the years the Ashland Community Foundation has done just that for Asante Ashland Community Hospital and has touched every corner of our hospital operations, that doesn’t change as we go into the future. We will still need our friends and our support from the foundation as we work on projects to transform the way we deliver health care in our community and we’re looking forward to the future and we know that we’ve got a great partner in our foundation, and we thank our foundation members as well as all of the supporters over the years of our foundation